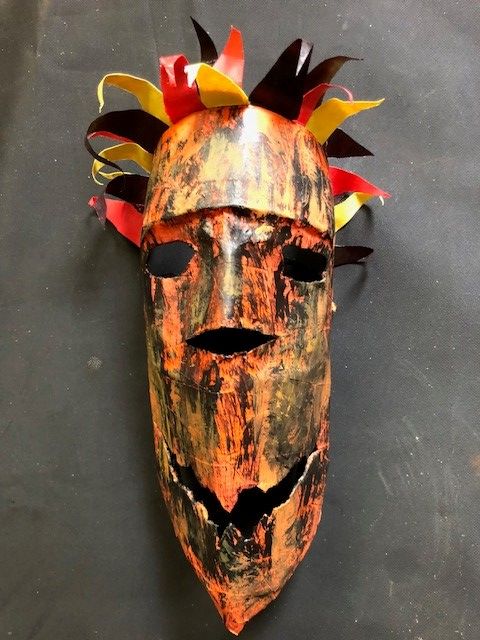 Most artists follow a highly unique path in which they can develop and express their craft and creativity. But even by those standards, Willis’ personal journey as an artist is exceptional.

“I’m not a conventional artist,” Willis explained. “People like my work because it’s different from what has been shown all the time, I guess. I have to be different. I have no other choice.”

His personal story is as distinctive as his artwork. Until Willis made contact with the continuum of care provided by Community Advocates’ homeless outreach and supportive housing programs, he lacked a permanent home for years.

“They have helped me out a lot,” Willis said. “I am eternally grateful that everything has unfolded the way it did.”

Years ago, Willis had been accepted to art school and tried to make it work. But after a series of personal losses and emotional distress, he quit school. He wasn’t able to work much, thanks to a joint injury. And he lost a steady place to live.

“I was living in a shelter, and with friends and family, moving around a lot,” he said.

He found Repairers of the Breach, Milwaukee’s daytime shelter and resource center, initially only when he needed something to eat; later, to shower or use a printer. He also began participating in their art therapy program twice a week, a lifeline for an artist who needed to create but who didn’t even have a safe space to keep his supplies or artwork.

“I was painting outside, mainly, or at MATC or the library, and stashing my materials at Repairers of the Breach, because the people there knew that I was a good person,” Willis said.

While at Repairers of the Breach, he met Mary Ann Patti, Program Manager for Community Advocates’ Homeless Outreach Nursing Center, which engages individuals who are living on the streets while living with a mental illness. Patti was handing out sandwiches and water and providing connections to other resources and services. They met, and life moved on.

“I was not motivated,” Willis said of that time in his life. “I was kind of confused a bit. I was kind of hostile toward people. I felt that everyone I came into contact with, I was sort of skeptical of their company, of strangers.”

A few years later, finding a permanent place to stay sounded like a better idea to Willis. He was accepted into Community Advocates’ Autumn West Safe Haven, a low-barrier housing refuge for men and women who’d been experiencing long-term homelessness and persistent mental health challenges.

Willis’ case manager, Samantha, “referred me to Autumn West, but I didn’t get in right away. I had to wait for like three weeks until there was an opening. During those weeks I was sleeping outside or whatever. They took me, drove me there, gave me a tour of the place, and I was really pleased. It was very quiet and peaceful. They had a lot of stuff there that would help people in their lives, various resources. I was very pleased.”

Willis moved in and Autumn West staff helped him transition into his new life. He hadn’t been able to work because of his joint injury, so they helped him apply for income support.

“I was there when I got everything settled,” he said. “They helped me out with everything I pretty much needed.”

After about half a year, Willis was able to move into his own apartment, thanks to Community Advocates’ Project Bridge Supportive Housing Program.

“I never had my own place, but it was pretty cool,” Willis said. “It was something I felt I needed. I could do my studies and not be bothered by bad influences or unwanted distractions. It was very welcoming. I was very surprised. They asked me questions, like what kind of living situation do you want? So it was pretty much to my own liking. It worked out well, I would say.”

Reflecting on his experiences with Community Advocates, Willis said, “I would encourage everyone if they hear about the program to check it out and find out how it can help them in multiple ways. Everyone has a story and everyone has different needs. I’m sure the program will affect people in different ways because everyone is from different walks of life. The program helped me out a lot. I feel it can help more people. If people hear about it and need it they should go for it and hopefully their life will turn out the way they want it.”