A Conversation with Scott Allard, Author, Places in Need: The Changing Geography of Poverty 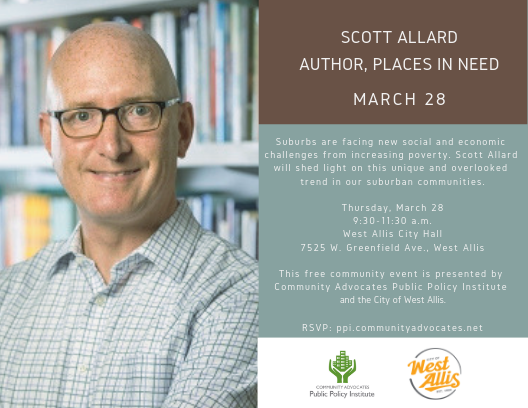 Did you know that more poor people live in American suburbs than in our cities?

Contrary to long-held stereotypes of suburbs as places of affluence far from the needs and stresses of urban life, Scott W. Allard reveals the truth about 21st century suburbs in Places in Need: The Changing Geography of Poverty.

Allard found that suburban poverty has more than doubled in the past 25 years and low-income households in the suburbs resemble their counterparts in the cities more than we ever imagined. That said, suburbs don’t have adequate safety net support to meet the needs of their struggling residents.

Community Advocates Public Policy Institute and the City of West Allis invite you to a lively discussion with Scott W. Allard on Thursday, March 28, from 9:30 to 11:30 a.m. at West Allis City Hall, 7525 W. Greenfield Ave., West Allis. This free event is open to the public, but registration is required.